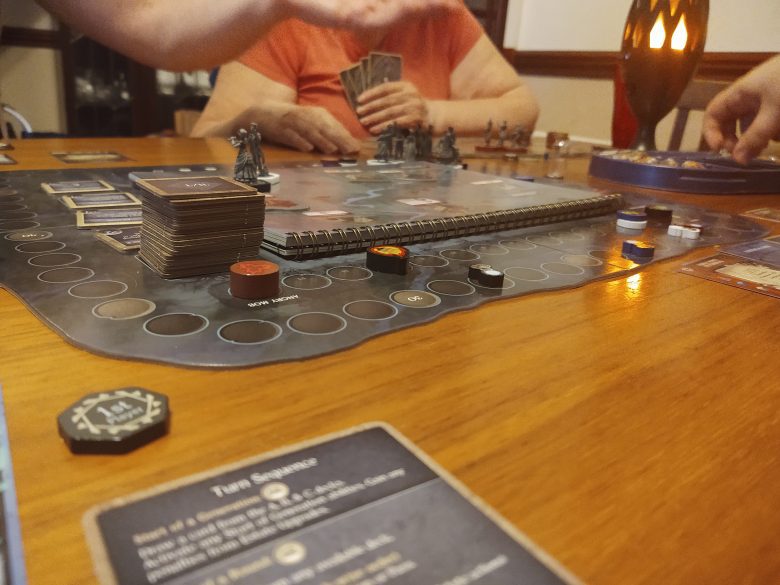 My Father’s Work is an app-based, story-driven, worker placement game. It takes place over three generations of a family of scientists in a Victorian, gothic Eastern Europe setting heavily influenced by Frankenstein and steampunk. For each generation you basically start the game again, but with a few things handed down from your parent.

The quality of the game is fantastic. The game contains trays for everything making it easy to set up and pack away (although it could have done with some baggies in the boxes). I bought the Kickstarter version so there may be differences with the retail version but: the resources are tactile – glass bottles, metal cogs and heat printed animals and coffins; the minis are washed so no need for painting, the rulebook has a linen feel and the boards are dual-layered.

Three scenarios, each with multiple endings, different maps (with worker placement spaces) and specific components (and you won’t see everything come out every time you play a scenario) mean that the game has a ton of variation.

The game is quite simple. You use workers to take actions. Actions may give you resources, help you store knowledge for future generations or complete experiments. Completed experiments give you points, knowledge and resources. But more advanced experiments require easier ones as pre-requisites and with your completed resetting each generation it’s hard to complete the high point ones.

Meanwhile, you risk going insane or upsetting the townsfolk by being creepy. Both of which can have some severe consequences for you game.

In the meantime the story develops over time, changing based on your actions, and affecting what you can do each time. In some cases what one of your opponents does (fellow family members – siblings or cousins) can also affect your game.

The app has had some teething troubles (in fact the app delayed the delivery of the game and still wasn’t ready when the game arrived), and some bugs have made the game very difficult to play. But these are things that are being slowly ironed out.

The only real downside is that the app includes a lot to read, sometimes out load and sometimes in secret. And you often can’t do anything while this reading happens so there can be a lot of downtime. The story adds flavour and I don’t think the game would be half as good without it, but I think aspects could be shorter, or there could be a short version to read for people who want a quicker game. The time estimate on the board is vastly off in my experience and this is easily a five hour game.

That said I love it and I certainly have no regrets ordering it. I look forward to playing it again and slowly unlocking all the endings. 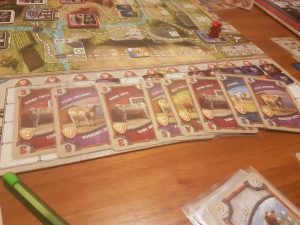 No comments to show.

Manage Cookie Consent
To provide the best experiences, we use technologies like cookies to store and/or access device information. Consenting to these technologies will allow us to process data such as browsing behaviour or unique IDs on this site. Not consenting or withdrawing consent, may adversely affect certain features and functions.
Manage options Manage services Manage vendors Read more about these purposes
View preferences
{title} {title} {title}